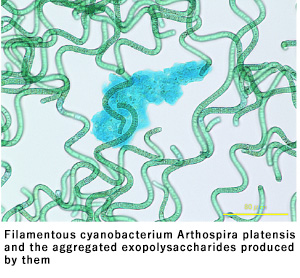 We are interested in the mechanism of growth, development and evolution of photosynthetic microorganisms and currently focusing on the study of the edible cyanobacterium Arthrospira (Spirulina) platensis. A. platensis is a filamentous alkalophilic cyanobacterium that has been traditionally consumed as food by people living along the shores of alkaline lakes in several regions in the world. Because it can be cultured under alkaline conditions where growth of other microalgae is suppressed, it can be produced in mass cultures outdoors as an almost single algal strain. Because of its easiness of mass culture, it is commercially produced in many subtropical areas in the world and consumed worldwide as food, food additives, and feed for animals and fishes. We are currently focusing on developing tools for molecular genetic studies of this cyanobacterium.